‘It makes me just feel like these people can be anywhere,’ Ahmed Mustapha said about hateful note 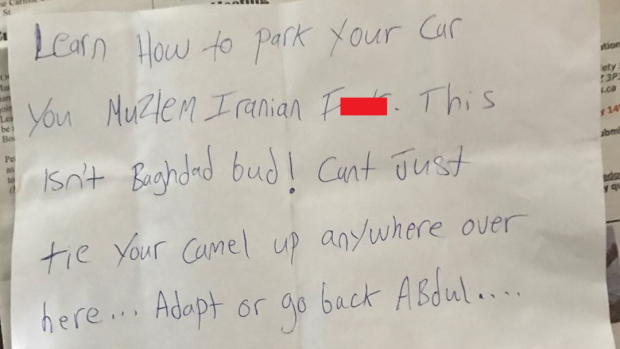 Muslim man living in Edmonton says his sense of security has been shattered by a racist note wedged into the driver’s side door of his car on Tuesday.

At first, 27-year-old Ahmed Mustapha said he thought it was a police ticket — but then he saw the handwritten scrawl:

“Learn how to park your car you Muzlem Iranian F**k. This isn’t Baghdad bud! Cant just tie your camel up anywhere over here … Adapt or go back Abdul … ”

Mustapha’s family brought him to Canada from the Palestinian territories 25 years ago and raised him as a practising Muslim.

He said it’s difficult to find words that describe how he feels about the note.

“I just didn’t think that that would be happening here in Canada, especially in my neighbourhood so close to home.”

He said he has parked his car in the same spot, on the street across from his Castle Downs home, every day for the past two years.

“It makes me just feel like these people can be anywhere. And I get that everybody has their freedom of speech. But for a hateful comment like that?”

Mustapha has filed a report with Edmonton police, and said they have agreed to meet with him Wednesday evening.

An EPS spokesperson confirmed a complaint was filed but did not provide any more information.

‘Complacency is not an option’

The Alberta Muslim Public Affairs Council is calling on law enforcement and government to step in before the situation escalates.

“Sometimes these things don’t get the attention they deserve,” said Aurangzeb Qureshi, a spokesperson for the council.

“We have to take this stuff and we have to address it at the beginning, because we now know what this can turn into,” he added, referring to the deadly shooting at a Quebec City mosque on Sunday.

“We need to address these things when they are relatively small. We all need to stand together and condemn it because if we condemn it together, it discourages those people who do commit these types of actions.”

Police in Edmonton have worked with the council in the past to address issues such as racist flyers left in residential mailboxes, Qureshi added.

“The advocacy and the pressure that’s applied definitely works, and we have to continue doing that to ensure that this stuff is taken seriously,” he said.

“We know now what can happen and complacency is not an option.”