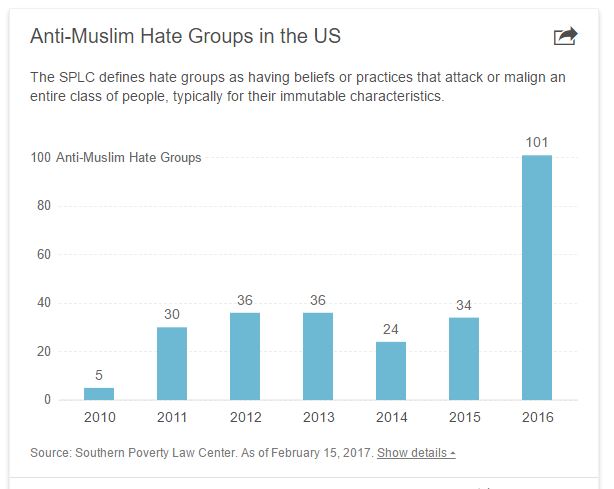 Engagement by hate groups on social media in the United States has surged in the last two to three years, according to a study released this week by research organization Safe Home. The study, titled “Hate on Social Media: A Look at Hate Groups and Their Twitter Presence,” found that the largest share of such activities targeted immigrants and Muslims.

There are almost 900 identified hate groups operating in the U.S currently, with Arkansas topping the list with the highest concentration of these groups. There are almost seven hate groups for every 1 million residents in Arkansas and the top agendas for them are racist skinheads and white supremacy, according to the study.

The study used data accumulated by the Southern Poverty Law Center, a nonprofit based in Montgomery, Alabama, which tracks extremist groups operating across the country. There are more than 1,600 such groups in the nation, according to the nonprofit.

Among the hate groups with the largest number of Twitter followers was the D.C.-based nonprofit Federation for American Immigration Reform (FAIR), according to the study. FAIR, which is focused on influencing legislation to limit the number of immigrants entering the U.S., has over 85,000 followers.

FAIR was followed by the Twitter account of Bill Keller Ministries (@billkeller2014) that has more than 65,000 followers, and anti-Muslim groups ACT for America (@ACTforAmerica) and Jihad Watch (@jihadwatchRS), which have over 55,000 followers each, the study said.