Crown Prince Mohammed bin Salman of Saudi Arabia authorized a secret campaign to silence dissenters — which included the surveillance, kidnapping, detention and torture of Saudi citizens — over a year before the killing of Jamal Khashoggi, according to American officials who have read classified intelligence reports about the campaign.

At least some of the clandestine missions were carried out by members of the same team that killed and dismembered Mr. Khashoggi in Istanbul in October, suggesting that his killing was a particularly egregious part of a wider campaign to silence Saudi dissidents, according to the officials and associates of some of the Saudi victims.

Members of the team that killed Mr. Khashoggi, which American officials called the Saudi Rapid Intervention Group, were involved in at least a dozen operations starting in 2017, the officials said.

Some of the operations involved forcibly repatriating Saudis from other Arab countries and detaining and abusing prisoners in palaces belonging to the crown prince and his father, King Salman, the officials and associates said.

One of the Saudis detained by the group, a university lecturer in linguistics who wrote a blog about women in Saudi Arabia, tried to kill herself last year after being subjected to psychological torture, according to American intelligence reports and others briefed on her situation.

The rapid intervention team had been so busy that last June its leader asked a top adviser to Prince Mohammed whether the crown prince would give the team bonuses for Eid al-Fitr, the holiday marking the end of Ramadan, according to American officials familiar with the intelligence reports.

Details about the operations come from American officials who have read classified intelligence assessments about the Saudi campaign, as well as from Saudis with direct knowledge of some of the operations. They spoke on the condition of anonymity for fear of repercussions from disclosing classified information or, in the case of the Saudis, from angering the Saudi government.

A spokesman for the Saudi Embassy in Washington said the kingdom “takes any allegations of ill treatment of defendants awaiting trial or prisoners serving their sentences very seriously.”

Saudi laws prohibit torture and hold accountable those involved in such abuses of power, the spokesman said, and judges cannot accept confessions obtained under duress. The kingdom’s public prosecutor and the Saudi Human Rights Commission are investigating “recent allegations,” he said.

The Saudi government insists that the killing of Mr. Khashoggi — a dissident journalist living in the United States who wrote for The Washington Post — was not an assassination ordered from Riyadh. The decision to kill him was made by the team on the spot, government officials say, and those responsible are being prosecuted. Turkey and American intelligence agencies say the killing was premeditated.

The kingdom says that 11 Saudis are facing criminal charges for the killing and that prosecutors are seeking the death penalty for five of them, but officials have not publicly identified the accused.

Turkish forensic experts searching for the remains of Mr. Khashoggi at a villa in Turkey in November.CreditErdem Sahin/EPA, via Shutterstock 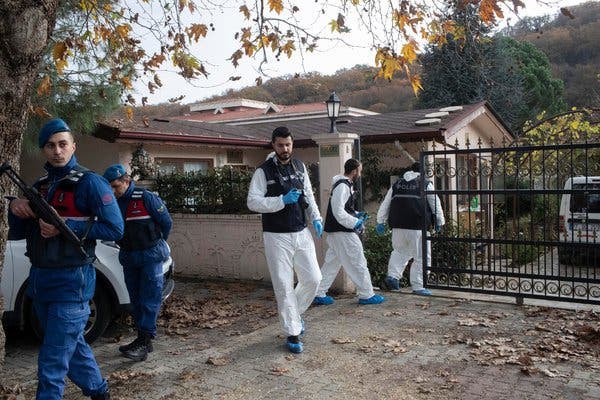 After the killing of Mr. Khashoggi, Saudi officials acknowledged that the Saudi intelligence service had a standing order to bring dissidents home. What they did not acknowledge was that a specific team had been built to do it.

Saudi officials declined to confirm or deny that such a team existed, or answer questions about its work.

Saudi Arabia has a history of going after dissidents and other Saudi citizens abroad, but the crackdown escalated sharply after Prince Mohammed was elevated to crown prince in 2017, a period when he was moving quickly to consolidate power. He pushed aside Prince Mohammed bin Nayef, who oversaw the security services, giving the young prince sway over the intelligence agencies.

Since then, Saudi security forces have detained dozens of clerics, intellectuals and activists who were perceived to pose a threat, as well as people who had posted critical or sarcastic comments about the government on Twitter.

“We’ve never seen it on a scale like this,” said Bruce Riedel, a former C.I.A. analyst now with the Brookings Institution. “A dissident like Jamal Khashoggi in the past wouldn’t have been considered worth the effort.”

Mr. Khashoggi was killed inside the Saudi Consulate in Istanbul and dismembered with a bone saw. Turkey used surveillance video and audio recordings to uncover the crime, identify the team that carried it out and leak their names and photos to the news media.

Mr. Riedel said the team’s sloppiness showed that it was used to operating freely inside the kingdom and not under the watchful eye of an adversary’s intelligence service.

The Rapid Intervention Group was authorized by Prince Mohammed and overseen by Saud al-Qahtani, a top aide whose official job was media czar at the royal court, American officials said. His deputy, Maher Abdulaziz Mutreb, an intelligence officer who has traveled abroad with the crown prince, led the team in the field.

Another operative on the team was Thaar Ghaleb al-Harbi, a member of the royal guard who was promoted in 2017 for valor during an attack on a palace of Prince Mohammed’s.

Many of those detained at the Ritz were subject to physical abuse, and one died in custody, according to witnesses. It is not known whether members of the rapid intervention team were involved in the abuse. The Saudi government has denied that any physical abuse took place there.

United States intelligence agencies do not appear to have conclusive proof that Prince Mohammed ordering the killing, but they have pieced together a pattern of similar operations carried out by Saudi operatives under the prince’s authority.

The agencies continue to gather evidence about Prince Mohammed’s role in the operations, and in December the National Security Agency produced a report saying that in 2017, the prince told a top aide that he would use “a bullet” on Mr. Khashoggi if he did not return to the kingdom and end his criticism of the government.

Intelligence analysts concluded that Prince Mohammed may have not spoken literally — that he was not ordering Mr. Khashoggi to be shot — but that he intended to silence the journalist by killing him if the circumstances required it.

The C.I.A. assessment has created tension between American spy agencies and President Trump, who has made warm relations with the Saudis a cornerstone of his foreign policy. The crown prince has been a close ally of the Trump White House, especially Jared Kushner, the president’s son-in-law and senior adviser. Despite the C.I.A.’s assessment that Prince Mohammed ordered the operation, Mr. Trump has said repeatedly that the evidence was not conclusive.

Aziza al-Yousef, a computer science professor, driving a car in Riyadh in 2014. She is one of the women’s rights activists who were detained last spring and summer.CreditHasan Jamali/Associated Press 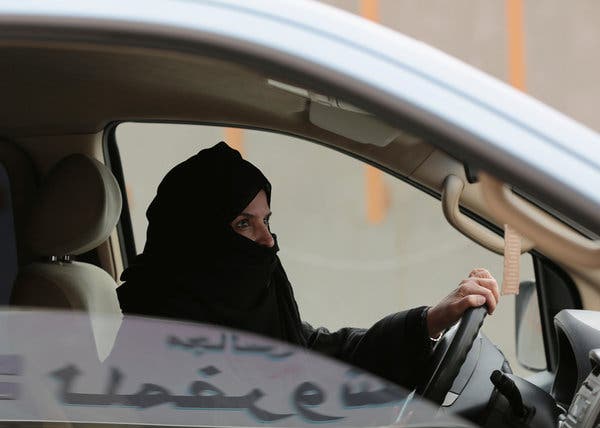 The grisly killing of Mr. Khashoggi led to a storm of outrage in foreign capitals and a new scrutiny of the powerful crown prince, who had billed himself as a forward-thinking reformer with a grand vision to modernize the kingdom. But the journalist’s killing was just the latest in a string of clandestine operations against less high-profile Saudis, including members of the royal family.

American intelligence officials said that some of those detained in these operations were held at secret locations, including opulent palaces used by King Salman and his son, until November 2017, when many were moved to the compound surrounding the Riyadh Ritz-Carlton. At the time, the hotel was being used as a five-star jail in the kingdom’s anti-corruption campaign.

That crackdown became a cover for clandestine operations against Saudi dissidents, who were moved into detention in the Ritz at that time, according to American officials.

The Rapid Intervention Group also appears to have been involved in the detention and abuse of about a dozen women’s rights activists, who were detained last spring and summer. The activists, who had campaigned for lifting the kingdom’s ban on driving by women, included several well-known figures: Loujain al-Hathloul, who had been jailed for trying to drive her car into the kingdom from the United Arab Emirates; Aziza al-Yousef, a retired computer science professor; and Eman al-Nafjan, the linguistics lecturer.

At first, the women were not held in a prison, but were detained informally in what appeared to be an unused palace in the Red Sea port city of Jidda, according to Ms. al-Hathloul’s sister, Alia. Each woman was locked in a small room, and the windows were covered. Some of the women were frequently taken downstairs for interrogation, which included beatings, electric shocks, waterboarding and threats of rape and murder.

In an Op-Ed article for The New York Times, Alia al-Hathloul wrote that Mr. al-Qahtani was “present several times” when her sister was tortured, and that he threatened to kill her and throw her body in the sewer.

Loujain al-Hathloul, who was jailed for trying to drive her car into the kingdom from the United Arab Emirates.CreditReuters.

The treatment was so harsh that Ms. al-Nafjan tried to commit suicide, according to a United States intelligence assessment.

The women were later moved to the Dhahban Prison in Jidda, where the physical abuse stopped and their relatives were allowed to visit, Ms. al-Hathloul said.

Their trial opened in Riyadh on Wednesday, but journalists and diplomats were not permitted to attend, and the government did not announce the charges against them.

The Saudi official said that Ms. al-Hathloul, Ms. al-Yousef and Ms. al-Nafjan were being tried “in connection with activities that threatened the kingdom’s national security.”

In the kingdom’s effort to forcibly repatriate Saudi citizens living abroad, it was not always clear which operations were carried out by the rapid intervention team and which by other parts of the security services.

At least one Saudi who was detained in the Ritz and accused of corruption, Rami al-Naimi, a son of a former Saudi oil minister, was forcibly repatriated from the United Arab Emirates in November 2017. An associate of a senior member of the royal family, Faisal al-Jarba, was snatched in a midnight raid on an apartment in Jordan last June and returned to Saudi Arabia. His family has struggled to get information on where he is or why he is being held.

In August 2017, a minor prince, Saud bin al-Muntasir bin Saud, was sent back to the kingdom from Morocco. Last May, a university student who had dual Saudi-Qatari citizenship was arrested during a visit to Kuwait and sent home.