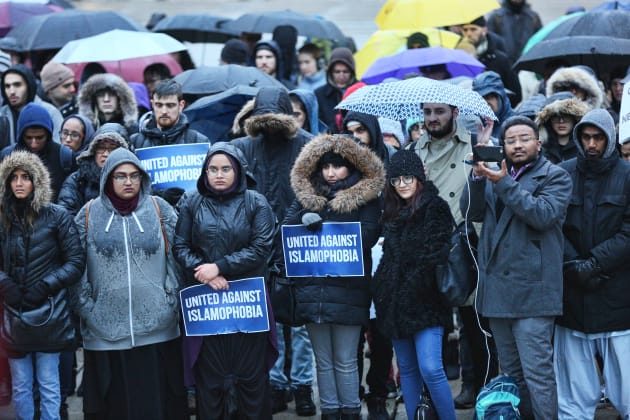 The Trudeau government has yet to act on year-old recommendations that could prevent the next tragedy.

While the latest mass murder of Muslims by a terrorist happened in Christchurch, New Zealand, it could have happened in Canada.

Despite the fact that Canada had its own national tragedy with Islamophobia on Jan. 29, 2017 when Alexandre Bissonnette opened fire on Muslim worshippers in Quebec City, little has fundamentally changed since then. Even after Parliament’s Heritage Committee published a study last year on Islamophobia and religious discrimination in Canada, the Trudeau government failed to respond to its 30 recommendations. Surely another mosque attack is not necessary for the government to get serious about the problem of Islamophobia.

Two years after the Quebec City attack, many Canadian politicians still appear to want to cultivate support within Canada’s anti-Muslim right wing. In Quebec, for example, Francois Legault seems intent on catering to the anti-Muslim minority. In January, he disingenuously suggested that Islamophobia doesn’t exist in Quebec, just months after proposing legislation which would outlaw the wearing of religious symbols in certain lines of work. At the national level, Conservative Party leader Andrew Scheer shared a podium last month with white nationalist and anti-Muslim groups, and then failed to condemn Islamophobia in his first statement on the Christchurch killings.

A willful blindness from our politicians may suggest to some extremist elements that anti-Muslim bigotry is acceptable. While the Christchurch shooter who killed 49 Muslims at prayer had no criminal history, he was an alleged white nationalist and self-described fascist. Like New Zealand, Canada is one of many Western countries which has a growing number of white nationalists and Islamophobes who congregate online and off in a long list of right-wing, anti-Muslim groups, including the Soldiers of Odin, the Three Percenters and La Meute.

In fact, the number of right-wing extremist groups in Canada grew by 20 to 25 per cent between 2015 and 2018. Between 1980 and 2014, such groups were responsible for 120 different criminal incidents, ranging from drug offences, attempted assassinations, bombings and other attacks — incidents that Canada’s Muslim community is all too familiar with. By comparison, there were only seven “Jihadist-inspired incidents” over the same period in Canada.

Despite this history of criminal incidents by right-wing extremist groups in Canada, the Canadian Security Intelligence Service (CSIS) had abandoned its investigations into such groups prior to the 2017 Quebec City attack. According to Bernie Farber of the Canadian Anti-Hate Network, Canada’s public security organizations have a long history of downplaying the danger from far-right groups.

While Canada does have anti-hate laws in its federal criminal code, the Conservative government repealed section 13 of the Canadian Human Rights Act in 2013 — thus weakening the legal options to combat hate speech. According to Dr. Barbara Perry, an expert on hate crime in Canada, “The legislation is weak, and the enforcement is even weaker.”

Politicians should use their platform to calm the strong emotions around bigotry, not to stoke the flames of intolerance. Unfortunately, this was not the case when Australian senator Fraser Anning suggested that the Christchurch shooting was understandable given New Zealand’s immigration policy which allowed “Muslim fanatics” into the country.

But many Canadian politicians have hardly been better. When motion M-103 to condemn Islamophobia came before Parliament during the Conservative leadership race in 2017, several Conservative leadership candidates catered to right-wing tropes, suggesting that the motion could suppress free speech or open the door to Sharia law in Canada. So merely weeks after the Quebec City mosque shooting, rather than using their platform to temper Islamophobia in Canada, these politicians used the motion to polarize sentiments.

To be clear, politicians are free to disagree about immigration policy, but they should feel a moral obligation to publicly support the public safety and inclusion of all citizens, especially immigrants. But even while motion M-103 was the source of such outrageous discourse in Canada, it ultimately provided a path forward for the Trudeau government. The motion called for a study on religious discrimination that was ultimately published by Parliament’s Heritage Committee in February of 2018.

“The Christchurch mosque shootings should serve as a kick in the pants to the Trudeau government”.

While not perfect, the study did gather input from dozens of representatives of Canada’s religious communities, along with experts on religious discrimination and bigotry. Based on this input, the study made many sensible recommendations. It proposed, for example, additional grant funding for security systems for religious communities. It also recommended that the government do a better job of collecting hate crime data, and that law enforcement better standardize the data.

The study also recommended programs to promote public awareness of different cultural and religious practices. Such programs would be intended to promote diversity and inclusion, and would target certain sectors that appear more vulnerable to religious bigotry. Law enforcement and government employees would also be the beneficiaries of programs promoting cultural sensitivity, as they are often caught up in the public controversies around Islamophobia.

Such steps are important: studies repeatedly suggest that media coverage in the West favours negative discourses about Muslims and other minorities. For example, violent crimes committed by Muslims tend to be emphasized in news reports, while violence against Muslims is downplayed or ignored.

The Christchurch mosque shootings should serve as a kick in the pants to the Trudeau government. The Quebec City mosque attack was over two years ago, and the Heritage Committee report was released over one year ago. Given the continued increase in Islamophobic incidents in Canada, it’s unconscionable that this government still hasn’t implemented some of the recommendations of the report. Even if some programs need time to take effect, the government could immediately take the symbolic step of recognizing January 29 as a national day of action on Islamophobia — another recommendation of the Heritage Committee.

While it may be that the Trudeau government wants to defer action beyond the next election for political reasons, that’s highly unethical on an issue of public safety. Worse, it will appear to be shamefully negligent if a mass shooting — especially one on the scale of the New Zealand attack — takes place in another Canadian mosque.

For all our sakes, let’s hope that never happens again. Not in Canada, nor anywhere else.