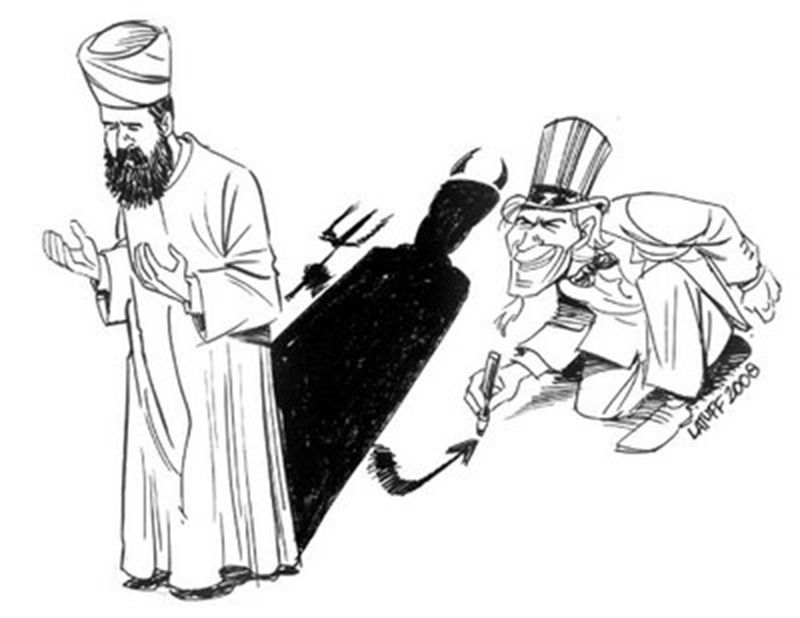 It ought not to surprise anyone that autocratic Arab regimes, right-wing groups in Europe, Israeli propagandists and a host of right-leaning think tanks, all have a common interest to fuel Islamophobia.

And not only does it derive from shared values of prejudice, but the active participation within right-wing forums between these actors is also indicative of a wider agenda at play.

But why would Arab governments who have Muslim majority populations, be venting hated against fellow Muslims?

One can understand the racism which informs right-wing neo-Nazi groups to behave like thugs, targeting migrants, refugees, minorities and Muslims, but certainly, not Arab regimes would be a general sentiment.

Yet it is true.

A recent report in Foreign Policy (FP) confirms this.

It claims that some Arab regimes have a vested interest in being in bed with racist bigots and to fund their operations. Millions of dollars are spent on think tanks, academic institutions, and lobbying firms to shape the thinking in Western capitals about domestic political activists opposed to their rule.

A wide open-ended field of “counter-extremism” in conjunction with “counter-terrorism” which has become mainstream, is the arena used by these regimes to elicit sympathy from the West.

By claiming to be under attack by “radical jihadis” – a term popularised by Israel and the United States following 9/11, countries such as Saudi Arabia, United Arab Emirates, Bahrain, Egypt, and other despotic regimes, have fueled Islamophobia.

In other words, just as Israel has used this faulty rationale to justify its policies of terror, so too have Arab tyrants. One can gather from the current processes of “normalization” how and why these regimes have joined hands with each other and the wider white supremacist movements to stem the roots of what is disparagingly described as “Islamist ideology”.

In essence, the demand by Arab client-states of the West is that Europe and America must not tolerate “Islamic extremism”. To do so in the name of human rights, freedom of expression and democracy would be wrong according to their logic.

Again not surprising it is a growing trend according to the report:

“…the culpability of Arab and Muslim governments in fueling anti-Muslim hate as part of their campaigns to fight dissent at home and abroad. By trying to justify repression and appease Western audiences, some of these regimes and their supporters have forged an informal alliance with conservative and right-wing groups and figures in the West dedicated to advancing anti-Islamic bigotry”.

The authors reveal that based on dozens of conversations conducted over several years, they found that autocratic regimes in the region carefully cultivate conservative and far-right circles in the West that they believe lean toward their own anti-Islamist agendas.

“The two sides’ political goals don’t completely overlap: Western Islamophobia can be far more vehement and sweeping than the variety supported by Arab governments. Nevertheless, both sides find the partnership beneficial. Arab propagandists claim there is an inherent connection between so-called political correctness and a tendency to downplay ideologies that lead to terrorism—claims that are seized on by Western conservatives to legitimize their own arguments.”

From the alliances which Europe and America have formed with these regimes, which includes arming, funding, setting up military bases, launching military operations, black sites, etc, it is clear that their Islamophobic scare tactics are working.

The atmosphere thus created makes any alternative to these regimes unthinkable from a Western policy standpoint. The entire canard of democracy remains a ploy. The subterfuge associated with so-called human rights policies is a damning indictment against the West.

As per the FP report, the scapegoating of political opposition enables these regimes to clamp down on dissent at home with impunity.

Following the 2013 military coup in Egypt which deposed the elected leader Mohamed Morsi and jailed him along with thousands of Muslim Brotherhood members, many tortured and killed behind bars, the coup leader Gen Abdel Fattah al-Sisi, used the same Islamophobic ruse to justify his repressive policies.

His illegal swoop didn’t stop with the banning and outlawing of the country’s most popular socio-political Islamic movement; he nabbed and jailed students, journalists, academics, civic activists and Imams who refused to bow to his unjust dictatorship.

Western allies and fellow-regional despots who share al-Sisi’s strongman approach to stamp out opposition, do so by justifying their common fears about what they perceive to be “Islamist extremism” – a classic case of Islamophobia.

The FP report cites the example of how when European countries became critical of Saudi Arabia after the growing casualties in Yemen, the imprisonment of women activists and the murder of Jamal Khashoggi, Riyadh turned to the rightwing for support.

“Among other efforts, a delegation of Saudi women was dispatched to meet with the far-right bloc of the European Parliament.”

While it sounds to be an oxymoron for Muslim governments to be in bed with hardcore rightwing racists, the fact is that autocratic regimes will apply any ruse to retain power. And Islamophobia suits their policies perfectly.